James Cicero Hunt was the brother of Ida Hunt Huckaby, my second great grandmother. He and his family settled in Douglas County sometime in the 1880s and many members of the Hunt and Huckaby families were living there by the turn of the century. James Cicero owned the Goode Hunt Store off what is now highway 5 in Bill Arp. Around 1885 when a new post office opened in the area, he became the first postmaster. This account of how that came about is from the journal of his great, great granddaughter, Carol Garrett:

…upon the closing of Empire Mill Post Office on Bear Creek, circa 1885 the Federal Postal Office opened another post office three miles west, in the growing community around Pray’s Mill Church.

The new post office, and eventually the surrounding community, was named for famous Atlanta Constitution columnist Charles Henry Smith who wrote a much-loved column about southern life under the pen name “Bill Arp.” Per Carol Garrett, a local school teacher named Will Gurley was asked to contact Charles Henry Smith by letter asking permission to name the new post office after his alter ego, permission which was apparently received.

James Cicero Hunt remained Postmaster of Bill Arp for twelve years until 1897 when he sold his store containing the small post office to Jackson Banks. 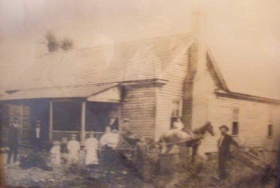 Almost seventy years later, in 1964, my grandparents bought a farm in Douglas County just up the road from Pray’s Mill Baptist Church in the community of Bill Arp. One reason my grandfather chose that area was because so much of his family were from there. There was an abandoned farmhouse near their farm that my grandfather remembered visiting as a child. He walked me through it once and told me what it was like to get up in the morning in an unheated house in the winter and get the fireplaces going, something he was required to do as one of the children, his status as a houseguest notwithstanding. The house belonged to a relative but I don’t remember him telling me which one. It looked very much like the picture I have of the Hunt family farmhouse but so many farmhouses of that era look the same that I can’t be sure if it was the same house. By the time I was in high school the old farmhouse had been torn down to make way for a new house and there’s no one in our family still alive who would remember if it was the Hunt place or not.

We eventually moved to Douglas County as well and built a house on my grandparent’s land. I spent much of my childhood and early adolescence there and attended Pray’s Mill Baptist Church, never realizing I was was but a stone’s throw from where one of my great uncles was the Postmaster of Bill Arp.