This letter was written by my third great grandfather, Noah Richardson Smith in 1862 in the midst of the Civil War. I found the text of the letter among family documents after my father died in 2013. The original letter, according to my father’s records, is in possession of a Henryetta Green of Greenville, South Carolina. How, or if, she’s related to us, I don’t know.

I’m related to Noah Richardson Smith through my paternal grandmother, Maple Louise Smith Farlow. In 1864 he shows up on a list of men exempt from serving in the reorganized Georgia militia because of his occupation as a minister. The letter is written to Noah’s parents, John Darkins Smith and Nancy Rector Smith. 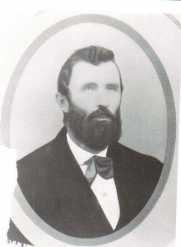 I have taken my pen to write you once more. It is a long time since we have heard from you. I suppose you have not received them (the other letters) or you would have answered them. Of course, however, this may be we are very anxious to hear from you. These lines leaves us all well and we hope they may find you all in the enjoyment of health. Dear father and mother, these are evil times that has come upon us. Words would fail to describe the suffering and distress that is in our land. Those who stayed at home know very little of the reality of it. Thousands of widows and ten thousands of orphan children are left to the cold charities of the world to drag out a life of misery and sorrow. I am glad to be able to say, however, so far as my knowledge extends in this country there is manifest a disposition on the part of the county authorities to make provisions for the soldiers and children. This will, of course, make taxes very high but it is no more than right for the rich farmer or merchant to pay the expenses of soldiers and soldiers families.

The wheat crop in this country is very light and oat crop is a total failure except the fall oat. Corn crops are looking very well. Bacon is worth .33c per pound, syrup is $1.50 per gallon, sugar is .25 and .30c per pound, cotton yarn is $2.00 and $2.50 per bunch, cloth made from plain .40c per yard, coperas (perhaps he means copperas or iron sulfate) is .70c per pound and soda is $1.25 per pound, salt .20c per pound, shoes $3.00 to $4.00 per pair. There is an abundance of corn planted (but) no cotton at all for sale. Rebecca (my third great grandmother) and the girls are weaving. They have sold this year 300 yards of cloth besides making nearly 200 yards for family use.

We want you to write to us the particulars of the death of brother Sam and who of the boys are in the war and whether any of them have died or been killed in the battle and where they are if you know. The children all send you howda with our best wishes for your welfare in life and happiness in death.

We remain your loving children until death.

One interesting fact, Noah did have an older brother named Samuel, possibly the “Sam” mentioned in the letter, but he did not die until 1896. So, it’s possible the family heard that Sam was killed only to find out later he was alive.